A connected car is more like a new car technology feature pack to a certain extent. This is a groundbreaking technology that will subvert the traditional automotive industry structure, usher in new business models, and change the nature of the automotive industry. Cars are rapidly becoming the â€œthingsâ€ in the Internet of Things: interoperability between other smart devices such as computers, smartphones, sensors and actuators. By 2020, it is estimated that 50 billion smart devices will be connected to the Internet, which is 10 times that of personal computers.

As of now, most cars are equipped with sensors and are connected to high-speed wireless networks. They are driving the development of a range of digital services while transmitting a large amount of important data. Over time, these services will redefine the value proposition of the car. From Germany alone, it is expected that by 2020, the German automotive industry's annual investment in digital and Internet of Things will reach 11 billion euros. In 2015, spending on R&D has exceeded 40% of the planned budget, thanks to innovation pressures from traditional and digital sectors. With the continuous innovation of digital content in the automotive industry in recent years, the return on investment in research and development of non-digital components will shrink, and the return on investment for traditional functional innovation research such as chassis and engine will also shrink. 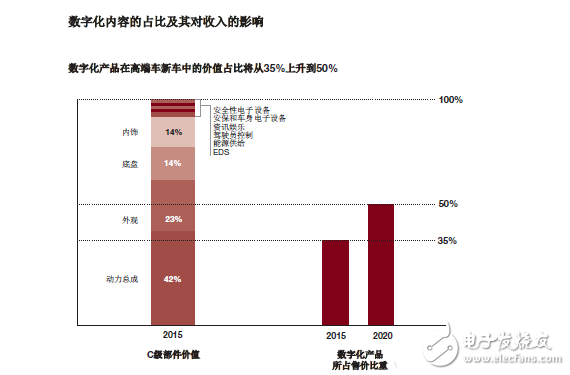 It is expected that by 2020, the automotive industry will begin to truly shift to autonomous driving. By 2025, 20% of the new cars sold have obvious autopilot functions. Pilot driving will start in the city first, and the initial autopilot will not be completely automatic. While digital participants are working on revolutionary innovations such as autonomous driving without a steering wheel, automakers see autopilot functionality as a driver's aid package from "passive" features (such as today's parking aids) System) to a semi-automatic driving system that the driver can control at any time. Of course, these technologies will become more mature and stable, and in 2030, people can even see self-driving vehicles without a steering wheel. Even with conservative estimates, the market penetration rate of autonomous vehicles is expected to be 15%-20% by 2030. 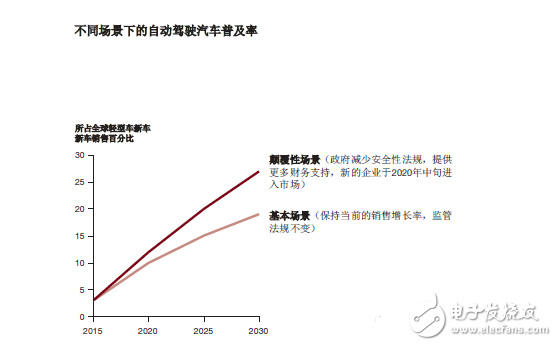 After experiencing the impact of the autonomous driving function on the journey, perhaps those who question the autopilot function will change. Because the autopilot function completely liberates the driver's hands, it also makes them no longer have to stare at the road for a long time, so that people can turn their attention to other activities during the journey, such as watching movies, shopping, and participating in social activities. Or hold a conference call.

Self-driving cars have the potential to transform mobile. Shared car services such as Uber and Lyft are the precursors to this transformation. They have developed a customer base that is accustomed to seeing purchase mobility as a service rather than having a specific vehicle. Many vehicles will be dedicated to developing specific itineraries, just like the â€œparking podsâ€ service at London Heathrow Airport, where autonomous vehicles can carry passengers and send them to their respective terminals. Some cars will be used for special purposes, such as picking up passengers to go on holiday. There are also vehicles that can be used for commuting, replacing traditional commuter vehicles and buses, such as through a calculated, organized, coordinated route that allows people to travel more comfortably and conveniently between home and work. In many large cities, mobility often manifests itself in a crossover mode, linking infrastructure for autonomous vehicles to equipment for walking, cycling and public transportation.

According to the Economist study, the automotive industry is one of the most expensive household investments, but 96% of the time is idle. With the development of autonomous vehicles, this number will also be improved. The development of mobility as a service will reduce the number of ground vehicles, alleviate traffic congestion and the need for parking space. This will make the car and the vehicle used now (2015) look completely different; this is also a challenge to the mindset of people's initial impressions about the car.

Automated vehicle technology will also change the use of cargo transportation and heavy machinery. The cost of installing sensors, GPS, radar and software-driven controls into trucks has dropped from the early â‚¬180,000 to several thousand euros. These assembled vehicles will significantly reduce such standard costs, such as insurance. Since the truck can be moved around the clock and the cargo can be adjusted accordingly, this can increase fuel usage by 15% to 20%, and at the same time it is highly likely to increase the same amount of productivity. The highway will therefore become relatively unobstructed, especially when long-distance cargo lanes and traffic jams overlap. Of course, the challenges are huge. But as connected trucks are separated from closed-loop systems, such as those used in the mining industry to transport ore, connected trucks can become a standard rather than an exception to the transportation logistics industry. 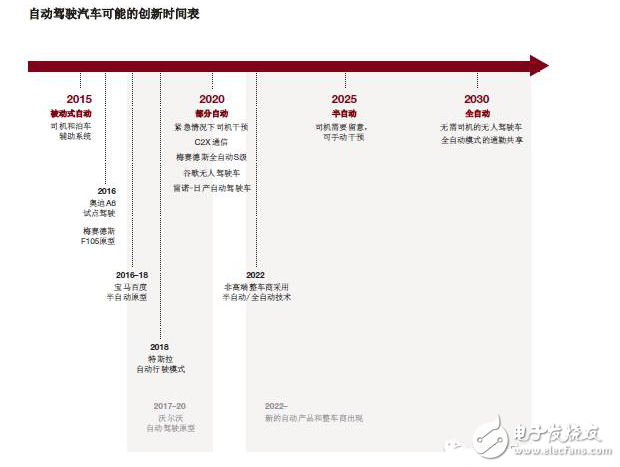 In the early stages of development of intelligent networked vehicles (2015 to 2020), it is expected that some car manufacturers will innovate according to their declared concept car style. The ever-changing nature of driving will bring new and lucrative digital benefits, which also provides opportunities for many participants. The shift â€œseeing liquidity as a serviceâ€ will break the value chain of the traditional auto industry, but it will also create entry points for new competitors. New players will join the competition, such as the tech giants Apple and Google, as well as traditional allies like Tier 1 suppliers. In addition to car manufacturers, together with the auxiliary industry of the automotive industry, there will be pressure from the interruption of the interest chain, such as suppliers, dealer networks, after-sales service providers, car financing providers, used car dealers, taxis and public transportation systems. . All companies in these industries should be prepared for this change and find a coping strategy to lead themselves.

Successful car manufacturers and Tier 1 suppliers will not only focus on protecting their car sales, but will use smart networked car technology to become an important player in the relevant service market. As autopilot technology evolves, they will find new sources of sales. It is expected that these opportunities will cost each family 3,300 euros per year (only in the high-end car market).

red light therapy uses very low levels of heat and doesn't hurt or burn the skin. it is same type of light used in tanning booths, and it doesn't expose your skin to damaging uv rays.