In the fiery download of the "Processor and DSP Special Issue" in December, the e-family network is missing.

In the past few years, with the rapid spread of high-pixel, high-resolution and full-HD video and playback functions in smartphones, the camera function of mobile phones has made great progress. While mobile phone application processors can implement camera functions such as fast camera and browsing photos on PCs and mobile devices, many customers prefer dedicated image signal processors (ISPs) because they offer comparable high-end compact digital cameras. Image quality and effects. This article focuses on the development and performance of Fujitsu's Milbeaut Mobile image signal processing LSI chip for mobile phones.

With a variety of applications and features, the smartphone market has continued to expand. Since the introduction of the camera function in the mobile phone in 2000, it has been steadily developing, and has become a major mobile phone function capable of high-pixel, high-resolution and full HD video recording and playback.

Milbeaut Mobile is a family of image signal processors for mobile phone camera functions. It was developed by Fujitsu and has been selling well since 2003. Next, we will give a brief introduction to the Milbeaut Mobile series, focusing on the system architecture, configuration, functionality and processing performance of the latest Milbeaut Mobile processor MBG046.

The camera function is achieved by using a small and thin dedicated lens and image sensor mounted on the phone. Initially these restrictions prevented the phone from providing image quality like a digital camera. Therefore, ISPs must be able to increase the image quality captured by the lens and image sensor to a level that is satisfactory to users under these severe constraints.

Recently, as the pixel size of the imaging device is further reduced, the pixels are getting higher and higher, the imaging speed is getting faster, the image quality problem is gradually appearing, and the ISP function is also enhanced.

The image processor module is the main functional component of the Milbeaut Mobile ISP (Figure 2). It sequentially processes the image data received from the image sensor in the original image signal, including denoising and other correction functions, to produce beautiful images and convert the images into a format that can be displayed on a mobile terminal or a personal computer screen. 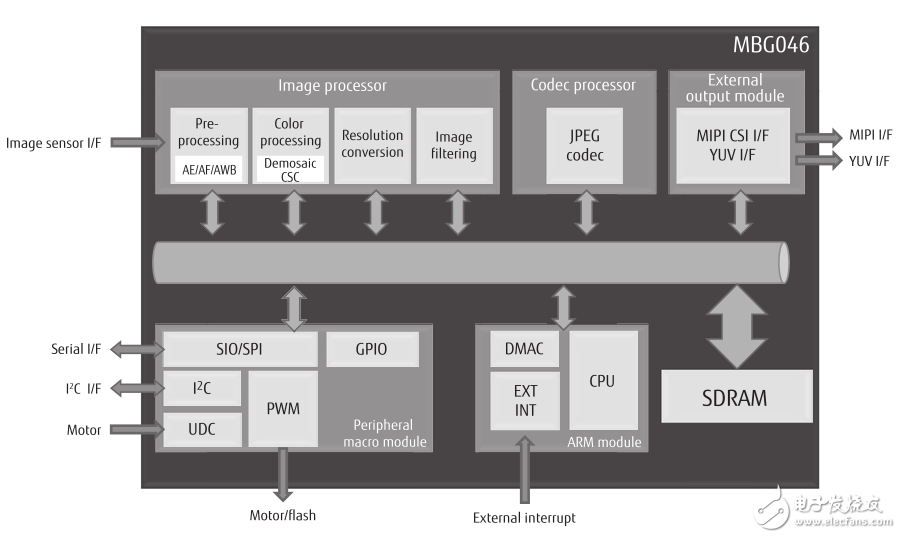