When the high frequency/microwave RF signal is fed into the PCB circuit, the loss caused by the circuit itself and the circuit material will inevitably generate a certain amount of heat. The greater the loss, the higher the power through the PCB material and the greater the heat generated. When the operating temperature of the circuit exceeds the rated value, the circuit may cause some problems. For example, the typical operating parameter MOT, which is well known in the PCB, is the maximum operating temperature. When the operating temperature exceeds the MOT, the performance and reliability of the PCB circuit will be threatened. Through the combination of electromagnetic modeling and experimental measurement, understanding the thermal characteristics of RF microwave PCBs helps to avoid circuit performance degradation and reliability degradation caused by high temperatures.

Understanding how insertion loss in circuit materials is produced is an important factor in helping to better describe the thermal performance of high-frequency PCB circuits. This article will take the microstrip transmission line circuit as an example to discuss the trade-off factors related to thermal performance of the circuit. In a microstrip circuit with a double-sided PCB structure, losses include dielectric loss, conductor loss, radiation loss, and leakage loss. The difference between the different loss components is large, and with a few exceptions, the leakage loss of the high frequency PCB circuit is generally low. In this paper, since the leakage loss value is very low, it is ignored for the time being.

After ignoring the radiation loss below 20 GHz, the insertion loss of the microstrip transmission line circuit mainly includes two parts, dielectric loss and conductor loss, and the specific gravity of the two depends mainly on the thickness of the circuit substrate. For thinner substrates, conductor loss is a major component. It is generally difficult to accurately predict conductor losses for a number of reasons. For example, the surface roughness of a conductor has a large influence on the transmission characteristics of electromagnetic waves. The surface roughness of the copper foil not only changes the electromagnetic wave propagation constant of the microstrip line circuit, but also increases the conductor loss of the circuit. Due to the skin effect, the effect of copper foil roughness on conductor loss is also frequency dependent. Figure 1 compares the insertion loss of a 50 ohm microstrip transmission line circuit based on different PCB thicknesses, with thicknesses of 6.6 mils and 10 mils, respectively. 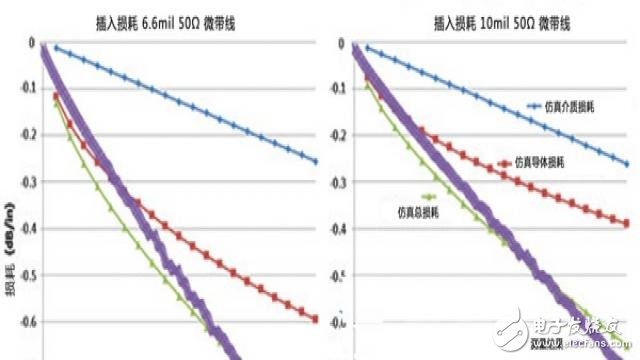 The curve in Figure 1 contains the measured results and the simulation results. The simulation results were obtained using Rogers' MWI-2010 microwave impedance calculation software. The MWI-2010 software cites the analytical equations in the classic papers in the field of microstrip line modeling. The test data in Figure 1 was obtained by the differential length measurement method of the vector network analyzer. It can be seen from Fig. 1 that the simulation results of the total loss curve are basically consistent with the measured results. As can be seen from the figure, the conductor loss of the thinner circuit (the left curve corresponds to a thickness of 6.6 mil) is the main component of the total insertion loss. As the thickness of the circuit increases (the thickness of the right curve is 10 mils), the dielectric loss and conductor loss tend to be close together, which together constitute the total insertion loss.

As shown in Figures 1 and 2, the thinner the circuit substrate, the higher the insertion loss of the circuit. This means that the thinner the circuit will generate more heat when the circuit feeds a certain RF microwave power. In the case of a comprehensive trade-off circuit heating problem, on the one hand, a thinner circuit generates more heat at a high power level than a thick circuit, but on the other hand, a thinner circuit can obtain a more efficient heat flow through the heat sink. Maintain a relatively low temperature.

A large discussion of the thermal conductivity of circuit substrates has been covered in earlier articles, and this article will cite some of the results and information in earlier articles. For example, both the following equations and Figure 3 are helpful in understanding the influencing factors associated with the thermal performance of PCB circuit materials. In the equation, k is the thermal conductivity (W/m/K), A is the area, TH is the heat source temperature, TC is the cold source temperature, and L is the distance between the heat source and the cold source. 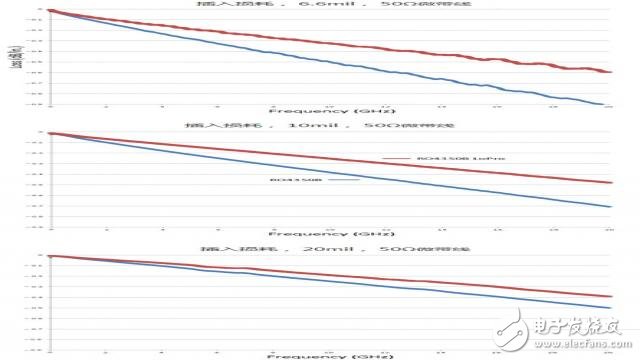 Figure 3 and its equations are a simple representation of the microstrip line circuit thermal model. In the microstrip line circuit, the top conductor layer serves as a signal plane, and the bottom conductor layer serves as a ground plane, and a dielectric layer is filled between the two planes. In the thermal model of Figure 3, the signal plane is assumed to be the heat source and the heat is generated by the signal plane, which has a heat sink and acts as a cold source, and the substrate acts as a thermal conductor to transfer heat from the signal plane to the ground plane. Although the heat generation process of an actual microstrip line circuit is complicated, such a hypothesis is acceptable for a simple thermal model. In fact, the circuit substrate is a poorly thermally conductive conductor. For example, copper, as a good thermal conductor, has a thermal conductivity of 400 W/m/K; while most commercial PCB substrates have thermal densities much less than this, only 0.2 to 0.3 W/m/K. 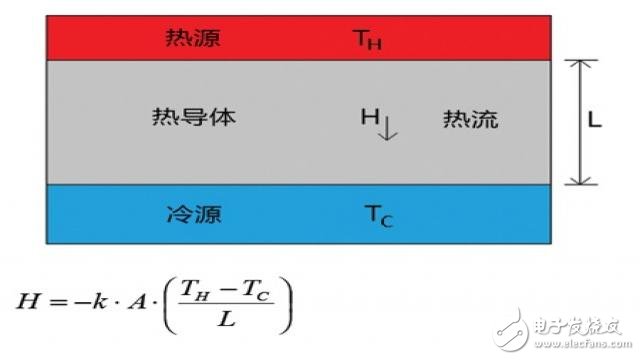 Figure 3. Basic thermal model of a microstrip transmission line circuit, the signal plane is a heat source, and the ground plane with heat sink is a cold source

In order to better understand the influencing factors related to the thermal performance of the PCB circuit, the 50 ohm microstrip transmission line circuit of the structure of Fig. 1 and Fig. 2 was used for research. Circuits of different thicknesses and different copper roughnesses are machined on the same type of PCB material. In addition, in addition to processing tightly coupled grounded coplanar waveguide microstrip lines on low loss PCB materials, circuits are also processed on high loss PCB materials for evaluation. The input RF microwave power range is 5W to 85W, and all circuits have a return loss of more than 18dB at 3.4GH and a 0.25-inch covered copper plate as the heat sink. The circuit is covered on a heat sink by a COOLSPANÂ® electrically conductive conductor film with a thermal conductivity of 6 W/m/K.

The infrared imager was used to record the heating of the circuit under certain power conditions. In order to ensure the accuracy of the measurement, the color of the circuit and its surface in the field of view of the infrared imager should be consistent. Using black lacquer as the surface color allows the thermal imager to obtain accurate thermal imaging images. Disadvantageously, the use of black lacquer increases the insertion loss of the transmission line. The increase in insertion loss causes the recorded heat to increase and can be considered as the worst case heat. In addition, since the ground-signal line-ground area of â€‹â€‹the coplanar waveguide covers the black lacquer and the current density of the area is large, the influence on the insertion loss (temperature rise) of the grounded coplanar waveguide is greater than that of the microstrip line circuit.

Table 1 shows the circuit structure, material type and characteristic parameters, insertion loss and temperature rise results of different circuits. This table provides a wealth of information for comparing the thermal effects of different circuit materials. For example, the thermal effects of circuits using different copper foil roughness based on the same circuit substrate can be compared from the table, the No. 3 circuit uses a rough copper foil, and the No. 4 circuit uses a smooth copper foil. As expected, the circuit on the smooth copper foil surface has a lower insertion loss than the circuit on the rough copper foil surface, so the temperature rise of the No. 4 circuit is also smaller.

Table 1. Temperature rise of circuits based on different structures and materials under the same power conditions

Comparing the No. 1 circuit and the No. 3 circuit, it can be found that the change in the thickness of the PCB material causes a difference in the rising temperature. These two circuits have the same material type and copper roughness except for the difference in PCB thickness. The No. 1 circuit is thinner than the No. 3 circuit, and its insertion loss is also higher than that of the No. 3 circuit. As mentioned earlier, when the circuit applies sufficient RF microwave power, the higher the insertion loss, the more heat is generated. However, as shown in Table 1, the rise temperature of the thinner No. 1 circuit is actually lower than that of the thicker No. 3 circuit. This is because the circuit No. 1 has a shorter heat flow path L as shown in FIG.

Comparing the No. 1 circuit and the No. 2 circuit, it can be found that the materials used in the circuit are identical, but the circuit design of the two is different. Circuit No. 2 is a coplanar waveguide circuit that is tightly coupled and has a plated through hole (PTH) near the edge of the coplanar ground-signal line. A comparison of the structure of the microstrip transmission line and the coplanar waveguide transmission line is shown in FIG. 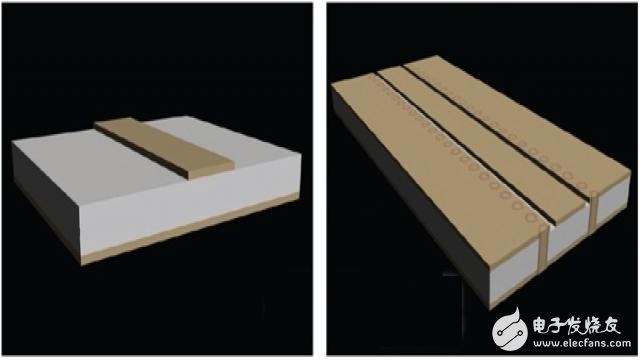 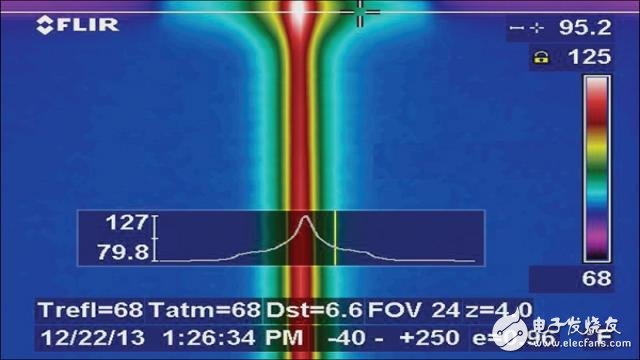 Figure 5. Microstrip transmission line overlooking the thermal imaging image, the apex corresponds to the heat at the signal feed point

Finally, comparing the No. 3 circuit and the No. 5 circuit in Table 1, it can be found that except for the PCB thickness of 20 mil, many other parameters are different. Circuit 5 is based on a low cost FR-4 circuit material that is rarely used in the microwave band. The insertion loss of circuit No. 5 is significantly higher than that of circuit No. 3. In addition, Circuit 5 also has many shortcomings in thermal performance, including high loss factor, low thermal conductivity, and high Îµr. For a 50 ohm transmission line, a high Îµr means that the wire width is narrowed, and the conductor loss of the circuit No. 5 is higher than that of the low Îµr circuit No. 3.

For any circuit thermal study, signal feed is often a critical point in the circuit because it is desirable to transfer RF power from the input port to the circuit under test as efficiently as possible. In this study, all experiments used a good 3.5mm termination connector from Southwest Microwave(). Although the circuit is optimized for good signal feed, there is always a certain amount of energy loss near the signal feed zone, which results in higher heat in the feed zone. Since the firing joint is a good thermal conductor, some of the heat can be conducted through the joint to the heat sink. Under high power conditions, as shown by thermal imaging, the temperature of the circuit signal feed region is higher than the temperature of the body portion of the microstrip circuit. Figure 5 corresponds to a circuit thermographic image of the above case, which circuit does not belong to the circuit listed in Table 1.