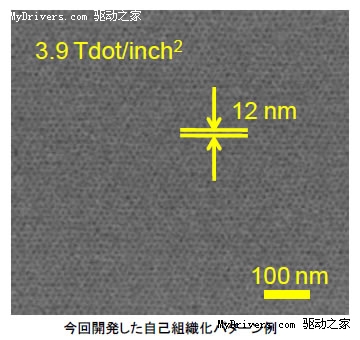 Earlier this month, NEDO and Hitachi had just announced a breakthrough in the field of hard disk drive head technology. By using microwave-assisted magnetic recording technology, it is expected to achieve a storage density of 3 Tbits per square inch. Today, NEDO and Hitachi teamed up with Tokyo University of Technology and Kyoto University to announce new developments in the field of disk platter media that can produce hard disk platters with a density of 3.9 TB per square inch.

Tokyo University of Technology, Kyoto University, and Hitachi have previously developed a chemical marking technique that makes polymer materials easy to aggregate on the surface of a platter substrate. A neat array of chemical markers is formed to form a neat array of storage media molecules. After the addition of NEDO, this technology has been further improved. By further miniaturizing the labeling matrix, the â€œorganic-inorganic hybrid polymerâ€ with a period of 10 nm is used, and a new marker is inserted between the dots. "Graphic density high magnification technology" achieved a breakthrough in storage density. In the prior art, an electron beam direct drawing (EB) method was used to form a mark array with a period of about 24 nm, while a new technology inserted another mark point in the middle, which has been made into a period of 100 nm and a period of 12 nm. The rules mark dot matrix. The polymer attached to it, after adding silicon atoms, solves the problem of structural instability and realizes an ultra-fine lattice structure of 10 nm class.

Based on these technologies, the new technology has increased the storage density by 4 times compared to the original solution to 3.9 Tb/sq. Compared with the current density of about 500 Gb/in2 for mass-produced hard drives, the storage density of new technologies has increased by 8 times. In the future, if this technology is put into commercial use, the 3.5-inch hard disk capacity is expected to exceed 10TB and reach the 20TB mark. The R&D team stated that more details of the technology will be presented at the 2010 Fall Meeting of the Materials Research Society in the United States at the end of this month.