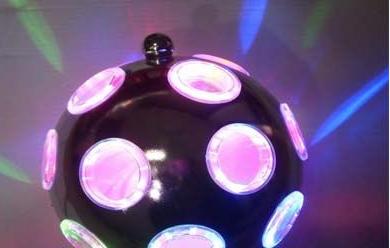 According to the statistics of the High-tech LED Industry Research Institute (GLII), after years of development, the Chinese LED stage lighting market has begun to take shape. At present, there are more than 100 domestic LED stage lighting companies with a certain scale (only manufacturing enterprises, not including trading companies). In 2012, the output value of domestic LED stage lamps approached 1 billion yuan, a year-on-year increase of more than 20 %.

Due to the superiority of LED lighting itself, LED stage lights have gradually gained recognition from the market, and market demand has also grown rapidly in recent years.

In 2012, the annual output value of China's LED stage lighting market reached 960 million yuan, a year-on-year increase of 23%. Compared with 2011, although the growth rate of market size has declined, it is still in a rapid growth trend. GLII expects that with the continuous maturation of LED lighting technology, the price of LED stage lamps will continue to decline. In the next few years, the Chinese LED stage lighting market is expected to grow at a rate of about 20%.

Compared with traditional stage lights using tungsten halogen lamps and gas discharge lamps as light sources, LED stage lights have many advantages. It is precisely because of these advantages that the Chinese LED stage lighting market can continue to develop rapidly.

1. Energy-saving and efficient. Under the same light effect, a few kilowatts of traditional stage lights can be replaced with hundreds of watts of LED stage lights, and because LED has less heat radiation, the efficiency of converting electric energy into light energy is higher.

2. Colorful and rich. The light beams of various colors and brightness can be combined by the red, green and blue three-color LEDs.

3. Long life. Conventional halogen lamps and other traditional stage lights last only a few thousand hours at most, and LED stage lights can last up to tens of thousands of hours.

As we all know, the current LED lighting market overall penetration rate is not high, one of the most important reason is that LED lighting products are too high price - is several times the traditional lighting, or even a dozen times, so that many customers are discouraged.

The price continues to decline. From Chart 2, it can be seen that the average ex-factory price of LED stage lights has been declining in recent years, and the decline rate in 2012 is more than 20%, which is the largest decline in the past two years.

The GLII believes that the average ex-factory price of LED stage lighting will continue to decline in the future, but due to cost, its price decline will gradually slow down.

GLII expects that the average ex-factory price of LED stage lights in China in 2013 will fall below 2,000 yuan, and the price decline for the whole year will be around 16%.

According to GLII data, currently there are more than 50,000 LED spotlights commonly used in venues and television studios in the country. If the LED stage lights in each venue cost an average of 50,000 yuan, the national LED stage lamp market will be roughly estimated. More than 25 billion yuan. Compared to the current domestic LED stage lights only about 1 billion yuan in market size, the future development prospects can be expected.