Look at the smart car headlights that best understand your mind.

2020-11-18 14:16:10
Technology has provided us with more new ways of road lighting. The luminous road markings and vehicle detection street lights are two good examples. Currently, based on the eye tracking of the driver, Vauxhall/Opel has announced a new method. 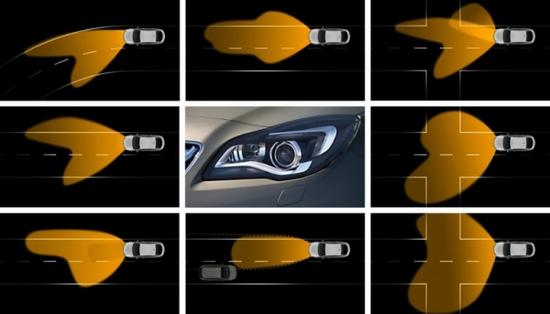 Opel's existing headlight technology is an adaptive forward lighting system (AFL+) with nine special lighting functions, including self-energizing lights, changing the lighting pattern according to the driving environment and adjusting the headlights according to the vehicle's steering. The company is also preparing to launch a new "LED matrix lighting system" that detects incoming light sources and then turns off the lights to avoid swaying themselves and others' eyes.

According to Opel, its eye tracking system has been developed for about two years. Based on this system, in addition to adjusting the direction of the headlights, it can also adjust the light intensity, as shown below:

In order to effectively detect the driver's line of sight, the system uses the camera to monitor driver's face key points such as the nose and eyes. In addition, the system uses an external infrared sensor and a central photodiode to allow the system to scan the human eye more than 50 times per second in dim and nighttime environments.

This system still needs to be optimized, because the initial recording speed of the camera and data calculation is too slow, which directly leads to the reaction of the headlights being too slow. If this problem is solved, the developer said that the headlight driver responds instantly, both vertically and horizontally.

Another problem to be solved is that the driver's spontaneous spontaneous eye movement will cause the headlights to malfunction. To solve this problem, the reaction can be slightly delayed by the algorithm, and then the reaction is smoother.

According to Opel, any owner can easily use the eye tracking headlight system without calibration and can be placed behind the wheel.

At present, this system is still in the research stage, Opel also hopes to study this system for a long time, but the LED matrix lighting system is expected to be launched within one and a half years.

Integrated Rimless LED Panel Light includes round and square two shape frame. We are the manufacturer of producing energy saving interior lighting. These trimless led panels has built-in driver and external driver. The frame shell is made of PC material. There are three color temperatures with cool white, warm white and natural white of panel lights. It has both concealed and surface mounted installation way. The unique features of led trimless light are: CRI>80, PF>0.5. These panels are mainly apply to home, office and school, etc.