TV back to family entertainment center

My daughter from birth to now, regardless of whether it is a photo or recorded video, is directly pushed to the TV, three generations to watch together, this time, that is, the most joyful time of the day, but also the best of a family At the time, everyone talked about photos or videos funny. Often go to the TV cloud to bring up the previous photo video to compare. For more than four years, I have been happy.

Coupled with appreciation of film and television dramas, watching variety shows, making video-telephone calls, and home-shopping, compared to a few years ago, the utilization rate of home TVs has become higher and higher.

All of this is essentially different from the TV in the age of broadcasting and television. Cable TV does not seem to be renewed.

As the largest screen in the family, TV is not only the entertainment center in the home, but also it is becoming the control center of smart home.

After the Internet age has evolved into the smart age, the utilization rate of TV may be higher and higher.

Over the years, there have been two trends in the change of television: one is getting bigger and the other is getting thinner.

How big is your home TV? 50 inches? 55 inches? Ever wanted a bigger TV that can enjoy home theater? Have you ever thought of it, but the high price is prohibitive? This is just right! In fact, everyone thinks this way.

Since my familyâ€™s TV utilization rate has become higher and higher, Iâ€™m looking forward to a factory that is Apple. Listening to TV has long since entered Apple's vision, but there has been no news from Apple TV. After several rounds of inquiries, it was reported that Apple TV did not make television because the screen was too expensive, and these screens came from Apple's competitors.

It is reported that in a television set, the screen cost accounts for more than 80%. Therefore, Apple TV's price is entirely dependent on its Asian competitors: Samsung and LG, so this is why Apple TV has not been there.

We know that when the screen of television is getting bigger and bigger, the price does not increase by the proportion of screens, but it grows in geometric progression. When the screen reaches 80 inches or more, the price of the TV is prohibitively expensive.

Laser TV will become the main character of the living room

In the long-awaited event, laser television was introduced. In 2014, the domestic color TV mainstream brand Hisense released 100-inch laser TVs independently developed by the company. It uses the principle of ultra-short-focus projection, and carries its own VIDAA operating system. It aggregates online resources such as video, education, games and shopping. The color TV industry began to transition to the â€œTV-free screenâ€ era.

First of all, prices have really come down. Taking a 100-inch TV distance, the price of laser TVs in the mainstream market is still as high as 670000 yuan, but compared with the price of 50-600,000 yuan in the same size LCD TV has a huge advantage. With hundreds of thousands of prices, it is almost insulated from ordinary consumers. The same large size laser TV is much cheaper than the LCD TV, and the price is more easily accepted by consumers. In July of this year, Hisense even announced 100-inch world's first DLP ultra-short-focus 4K laser cinema TV. The transition from 2K image quality to 4K, and the perfect 4K picture quality of LCD TV, the price is 79999 yuan. 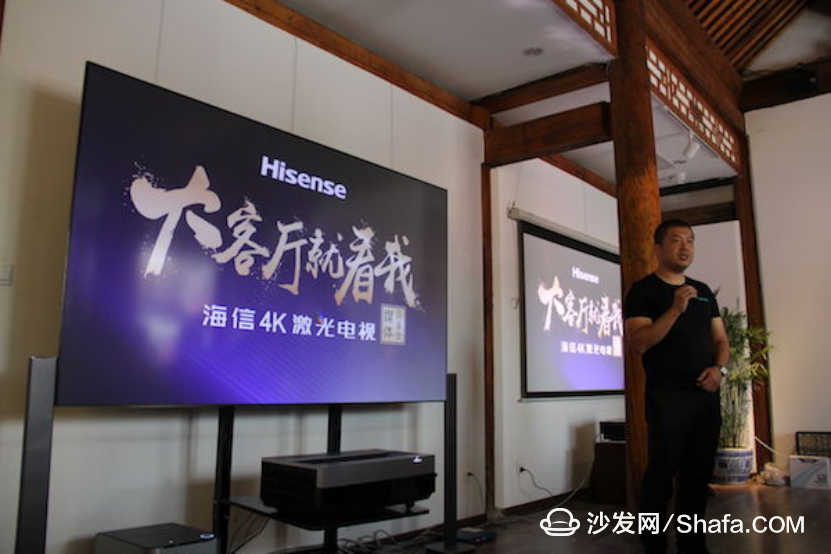 Second, take a look at the characteristics of laser television. Laser TV is a projector that uses a laser as a light source and uses reflective ultra-short focal projection technology to project light onto a special metal screen. Laser TV can easily achieve a 100-inch large screen, stronger presence; gamut coverage can theoretically be up to 90% of the human gamut, the screen is more real, more layered and more transparent.

Third, to compare laser televisions with traditional LCD TVs. Take Hisense laser television as an example. In general, Hisense laser TVs use cinema-level ultra-high definition laser projection technology, applying the same display scheme and 3D implementation as IMAX theaters, and Fresnel passive biomimetic screens. Hisense laser TV is on a large screen (80 inches to 120 inches), which is cheaper than the LCD TV (price is only 1/10 of that of a similar size LCD TV), and its power consumption is even lower (2K upgrade to 4K light utilization rate is unchanged, The consumption is about 1/3 of the similar size LCD TV, the volume is lighter (the weight of the laser TV is only 17.5 kg), and the response speed is 375 times that of the LCD TV. Compared with traditional projection equipment, Hisense's laser television has a shorter projection distance and a longer light source. It can be used in a brighter environment and is therefore more advanced than traditional projection technology.

For consumers who want to build a home theater, spending hundreds of thousands of huge amounts of money to build a home theater requires a video studio + projection + audio + screen, not only expensive, but also have to toss. For example, how can we transport home the ultra-significant-screen LCD TV weighing 200 kilograms? This is really a headache.

Fourth, what kind of content and services can we get on laser television? As a large-screen Internet TV, laser TV is equipped with Hisense's independently developed VIDAA smart control system, which integrates iQIYI, Tencent, ICNTV, and China Video, and has 15,000+ movies, 150,000+ episodes, and 73000+ episodes. The cumulative video duration is over 1 million+ hours; in addition, games, shopping, education, and other resources can be broadcast and watched directly on TV.

The formation of a home theater to improve the quality of life, laser television, will become the center of the future living room. The development of science and technology has always met our needs while surpassing our imagination.